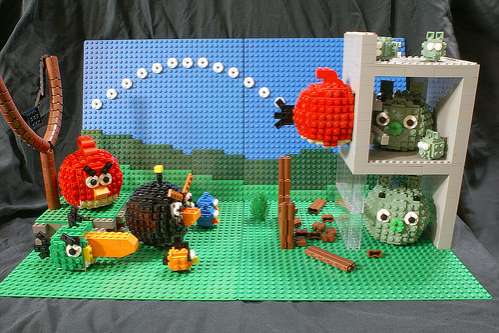 The LEGO Angry Birds Display is Located at a Texan Mall

Meghan Young — November 8, 2011 — Life-Stages
References: flickr & neatorama
Share on Facebook Share on Twitter Share on LinkedIn Share on Pinterest
By the looks of the LEGO Angry Birds display, this social media game is still going strong. Although it cannot be denied that the Angry Birds game isn't as addictive as it once was, the fact that it is still inspiring people artistically is very impressive. It is definitely a pop culture phenomenon that is here to stay.

Created by El Lago-based Flickr user SavaTheAggie (also known as Tony Sava), the LEGO Angry Birds was put together for the November LUG Showcase display at the Baybrook Mall Fiendswood, Texas, LEGO store. As a self-proclaimed "LEGO freak," Sava has only three passions in life: Family, Lego and BBQs. Of course, he can probably add Angry Birds to the mix as well.