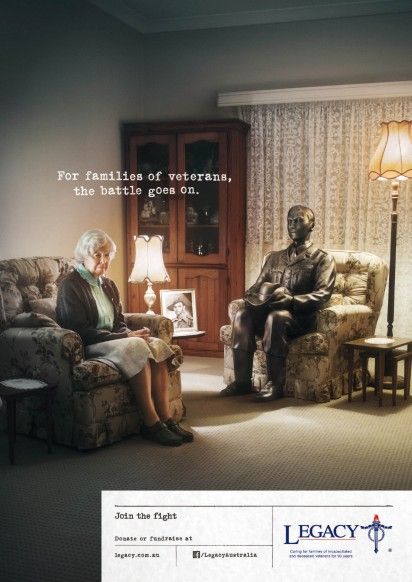 Meghan Young — September 26, 2013 — Marketing
References: clemengerbbdo.au & ibelieveinadv
Share on Facebook Share on Twitter Share on LinkedIn Share on Pinterest
At first glance, the Legacy Australia ad campaign appears to revolve around famous 'Star Wars' scene in which Han Solo is frozen in carbonite. Dads and husbands have been immortalized like bronzed statues for their contributions as war veterans. Yet such honors don't put food on the table, especially when these vets have been incapacitated, or worse, killed.

Conceived and executed by Clemenger BBDO, an ad agency based in Sydney, Australia, the Legacy Australia ad campaign is quite touching. It shows that statues have little to give in spite of how powerful message they send. The campaign was art directed by Dan White with creative direction by Paul Nagy, photography by Andreas Smetana and design by Tim McPherson. It reads, "Join the fight." Hopefully some do.
1.6
Score
Popularity
Activity
Freshness
Get Better and Faster