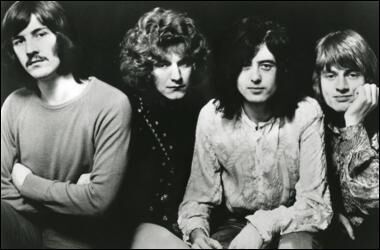 Cowbag — September 26, 2008 — Pop Culture
References: ledzeppelin & thesun
Share on Facebook Share on Twitter Share on LinkedIn Share on Pinterest
Led Zeppelin, the band Rolling Stone Magazine dubbed the biggest of the ‘70s, will launch on a reunion tour after Robert Plant finally acquiesced to rejoin the band. They have sold more 300 million albums worldwide, but split up in 1980 after the death of their drummer John Bonham.

Led Zeppelin had already resigned themselves to touring without Plant. They had even rehearsed with stand-in singers, which was the main reason behind Plant’s decision to return.

The tour will follows the massive success of their one-off reunion show at London’s O2 Arena in December.

Plant is said to be so protective of his band that Jack Black had to beg him to use ‘Immigrant Song’ in The School of Rock - see hottie Jack Black pleading to the band in this video. He can most certainly grace me with his mighty love, and yes, I would get down on my knees and beg.
1.1
Score
Popularity
Activity
Freshness
Get Trend Hunter Dashboard

50 Rocking Fashions
Rockstar Innovations to Bring Out Your Heavy Side