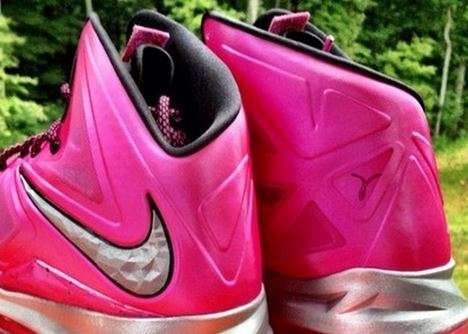 Thomas Wade-West — September 4, 2013 — Fashion
References: solecollector & sneakerwatch
Share on Facebook Share on Twitter Share on LinkedIn Share on Pinterest
Before releasing the highly anticipated LeBron XI later this year, Nike has proposed to release the 'Think Pink' (Kay Yow) colorway of the LeBron X in raising breast cancer awareness this year. The sneaker is named the Kay Yow in memory of Sandra Kay Yow, basketball head coach of the NC State Wolfpack women's basketball who passed away in 2009.

While Nike has followed a pink theme in breast cancer sneaker releases, this year's kicks feature hints of both metallic silver and black throughout. The kicks are in support of October's Breast Cancer awareness month alongside the Kay Yow foundation.

Whether or not you're a LeBron James or Miami Heat fan, this is one release we can all agree on.

Implications - Breast cancer awareness month has been a huge part of Nike Corp. whom have released a ‘Breast Cancer Awareness’ sneaker (in which certain funds are allocated toward a specific foundation, for example), for several years.
3.5
Score
Popularity
Activity
Freshness
Get the 2023 Trend Report FREE