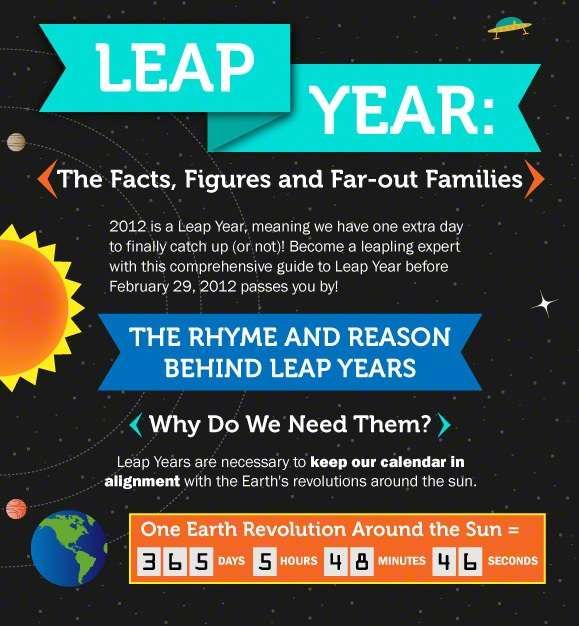 The Leap Year Infographic Details the Facts Around February 29

Rebecca Byers — February 24, 2012 — Pop Culture
References: twitter & cheapsally
Share on Facebook Share on Twitter Share on LinkedIn Share on Pinterest
Cheapsally.com's Leap Year infographic is a comprehensive look at everything you could ever want to know about February 29, which appears in the calendar every four years in order to stay in alignment with the Earth's revolutions around the sun. The chances of being born on Leap day are 1 in 1,461, and those people who are born on the day are called leaplings.

The highly detailed infographic breaks down the facts and figures that surround the day, like how Julius Caesar was the one to introduce the leap year around 45 BCE to the end of February, which was the last month of the year after January and February were added to the Roman calendar to reflect a lunar calendar.

It seems highly unlikely, but there are actually four million people in the world born on February 29, including, for instance, Ja Rule.
3.1
Score
Popularity
Activity
Freshness
View Innovation Webinars

Championship Rivalry Infographics
Super bowl XLVI: a Legendary Rematch is a Guide by the Numbers