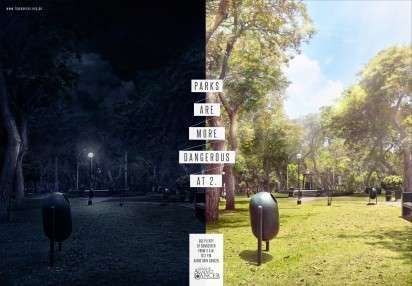 The League Against Cancer Campaign Promotes Use of Sunscreen

Meghan Young — January 25, 2013 — Marketing
References: yr & ibelieveinadv
Share on Facebook Share on Twitter Share on LinkedIn Share on Pinterest
Dark street corners and alleyways may seem full of thieves, murderers and rapists, but the League Against Cancer campaign attempts to show people that there is a more dangerous culprit out there and he strikes during the day. That culprit happens to be the sun. While darkened cities do have a seedy underbelly, attacks are not as common as sunburns or, sadly, cancer.

The League Against Cancer campaign was conceived and executed by the Young & Rubicam ad agency branch based in Lima, Peru. Art directed by Edher Espinoza with creative direction by Flavio Pantigoso, the campaign's copy was written by Daniel De León and Gino Bernabé. One reads, "Sport fields are more dangerous at 12."
1.4
Score
Popularity
Activity
Freshness
Jeremy Gutsche Keynote Speaker