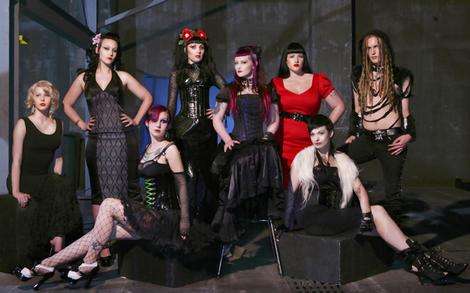 Since her teens, Ms Shields says she has been the “freaky, punky girl” who stood out, the proverbial sore thumb to some, but to others, an exotic bloom so striking jaws dropped. She hones her look of refined, gothic eclecticism with Victoriana corsets and fluttering, witchy skirts, liver-red lips and sharp, thinly arched eyebrows carefully drawn over winged, Nefertiti eyes. Her scalp is shaved from temples to ears, but her crowning glory is sculpted into a thick purple fringe with neon-pink and purple bangs that hang below her shoulders. “I look in the mirror every morning and I like what I see,” she says. “I don’t see myself as freaky. With this agency, I want to push that idea: that creative, expressive individuals are beautiful, not freaks. They’re just another way of being attractive.”

With her photographer business partner Coulson, Shields has been recruiting since September 2008. The only glitch so far is the gender mix, “We’ve got 33 girls and seven boys,” she says, “and I’d like more of a balance.”

Shields has already hired out several of her alternative models for modelling jobs, including Rachel Blakemore, 40, a doll-like beauty, well known in Melbourne’s thriving goth scene. Ward was cast for the recent Nando’s “Lick it Up” campaign. Jake Ficnerski, 23, a video store manager with tiger-striped dreadlocks to his waist, won a job with New Year’s Eve event campaign “Euchronia”.

Ms Shields says all her models are unique: “They’re selling themselves, not just a body for clothes like ordinary models. They arrive fully styled and made-up. They’ve got something in them you can’t replicate. If you tried to, you would probably fail. It’s beauty they’ve developed on their own.”
2.9
Score
Popularity
Activity
Freshness
View Innovation Webinars