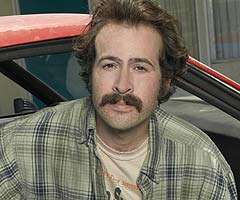 Bianca — April 23, 2007 — Unique
References: zap2it
Share on Facebook Share on Twitter Share on LinkedIn Share on Pinterest
Anyone who has ever watched the NBC's sitcom, My Name is Earl, has surely been appalled at Earl's lack of hygiene. As if visual repulsion wasn't enough, the show's promotions team has launched a new ad campaignâ€”to let you smell Camden County too.

The Thursday night comedy will air a special episode on May 3. Viewers who pick up that week's edition of TV Guide magazine will be supplied with a â€œLaugh 'n' Sniffâ€ card to enhance the sensory experience of the latest episode.

Earl, played by Jason Lee, will begin his job at an appliance storeâ€”his first real jobâ€”and Jamie Pressly's character, Joy faces uncertainty after making yet another poor decision about her trial in the special 35 minute episode.

NBC has been looking for innovative new ways to promote its shows. This certainly is uniquely bizarre: and smells like success!