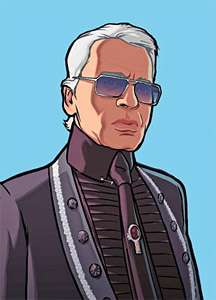 The larger than life fashion guru features as part of the game's soundtrack, where he plays as one of the radio DJs at K109 The Studio station.

Catwalk Queen reports that, "Lagerfeld didn't hesitate to star in the game's forthcoming edition, after he was introduced to them via friend Daphne Guinness."

Lagerfeld said, "I prefer to be in a video than to play with it. I would love to be a very nasty, politically incorrect character."