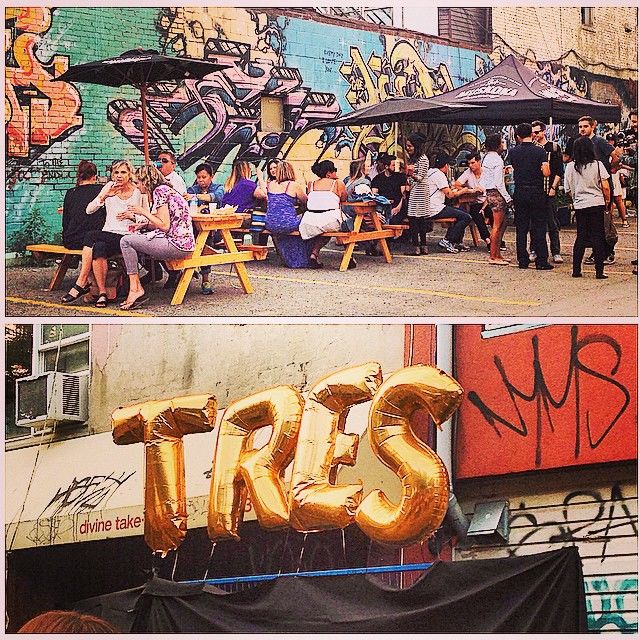 Rahul Kalvapalle — September 2, 2014 — Lifestyle
References: facebook
'Tres' was the aptly-named third annual street festival organized by Toronto restaurant La Carnita, which has gained a cult following for its unique pairings of street food, art and music. Whereas the previous two years' events -- 2012's 'Uno' and 2013's 'Dos' -- featured a melange of visual art, food and music, this year's celebration was a scaled-down event with a focus on food and music alone.

The party was organized by La Carnita owner Andrew Richmond and his friends, effectively a collective of creative minds comprising chefs, hip-hop musicians, artists and designers.

Even before I had a chance to scope out the party for myself, the affable Richmond thrusts a shot of tequila into my hand, before making it clear that this year's event eschews art displays in favor of a narrower focus on music and food:

The block party was held in La Carnita's L-shaped parking lot. The perimeter of the space was lined with food tents offering deliciously messy tacos, ribs, Asian fusion dishes and ice cream for people to enjoy at communal-style tables that encouraged mingling over food and drink.

A pair of booze tents flanked the music stage, which was lit up by an energetic roster of Canadian hip-hop acts including Toronto's very own Grand Theft, who took a break from his world tour to perform at the party.

“He likes to eat here when he's in town,” Richmond says. “We love what he does and he loves what we do.”

Everything about the food and music on offer at Tres was 'street', and this effect was accentuated by the fact that the event was held in an outdoor parking lot, yellow parking lines and all.

Richmond promises that next year's celebration – let's guess, it's going to be called 'Quatro' – will feature a return to art installations alongside food and music staples.

He reveals that the secret to the success of La Carnita's annual celebrations is the fact that the different elements aren't obsessively curated, but come together naturally based on organizers' genuine interests.

“We don't force anything,” Richmond says. “We just do what we like.”
4.3
Score
Popularity
Activity
Freshness