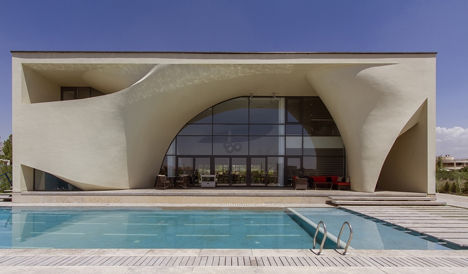 To honor the client's request to open the house up, the architects removed an octagonal void in the center of the house, as it had little communication with the surrounding landscape. Next Office's Alireza Taghaboni explains, "Because of its shape and size, this void could not give him the wide, bright interior he desired."

The architects chose to cover, rather than demolish, the void's steel columns by using a curved wall that covers the southern facade. The wall stretches towards the interior void, covering the columns, and joining the inside and outside seamlessly. The structure features openings to connect the void to the surrounding rooms, as well as accommodate double height spaces within.