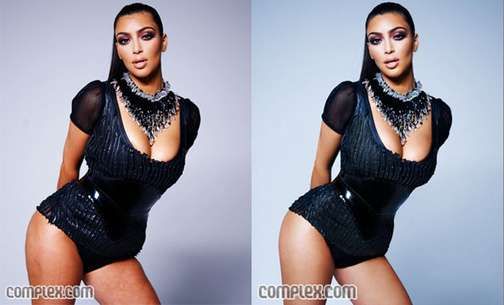 Kanye West, however, was not the only one who got a heavy make-over; Kim Kardashian’s photos received a mega dose of airbrushing, as illustrated by the images above. But unfortunately for the Photoshop crew at Complex (and Kim Kardashian), they put the untouched photo in their exclusive web gallery.

In looking at the pre-photoshop image on the the left, you’ll see that that celebutante looks heavier, has a bigger waist and a spotty, blotchy skin tone and noticeably larger thighs. Complex eventually replaced it with the retouched one, giving Kim a smaller body with a tiny waist and absolutely flawless skin to boot.