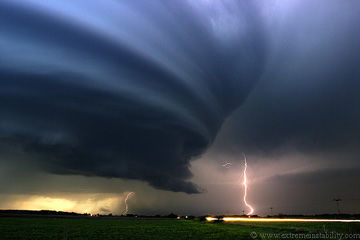 karl burkart — September 6, 2008 — Eco
References: nature-spot
Share on Facebook Share on Twitter Share on LinkedIn Share on Pinterest
With three killer storms about to hit the southeast coast, Hurricane Hannah, Hurricane Ike, and Josefina, we are all reminded that times (and weather patterns) have changed.  These remarkable photos were taken by Mike Hollingshead, a native of Nebraska who is both brave and talented.  Visit his site to see more amazing photos and a wealth of links to storm chasing bloggers.

Recent hurricane modeling has found that that hurricanes, simulated under warmer, high CO2 conditions, are more intense than under present-day conditions. Thomas Knutson and Robert E. Tuleya of the NOAA stated in 2004 that warming induced by greenhouse gas may lead to increasing occurrence of highly destructive category-5 storms.

Other scientists have found that wind shear, the increase of which acts to inhibit tropical cyclones, also changes in model-projections of global warming. There are projected increases of wind shear in the tropical Atlantic and East Pacific associated with the deceleration of the Walker circulation, as well as decreases of wind shear in the western and central Pacific.
5.3
Score
Popularity
Activity
Freshness
Attend Future Festival