30 Gifts for the Wine Lover 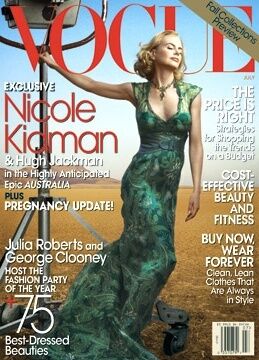 mediterranean — June 22, 2008 — Pop Culture
References: style
Share on Facebook Share on Twitter Share on LinkedIn Share on Pinterest
Pregnancy is not stopping Hollywood's top movie stars from promoting their upcoming films. Following Angelina Jolie's recent Vanity Fair interview, Nicole Kidman is featured on the cover and in the pages of the July issue of Vogue. The magnificent "Days of Heaven" photo spread was shot by famed photographer Annie Leibovitz.

Leibovitz was also commissioned by Anna Wintour for a behind-the-scenes of Kidman's new epic movie, Australia. In the interview, Nicole shared her feelings about her pregnancy and her excitement about the movie in which she stars along Hugh Jackman .

"When I first saw the baby on the ultrasound, I started crying. I didn't think I'd get to experience that in my lifetime. I like the unpredictable nature of it. To feel life growing with you is something very, very special, and I'm going to embrace that completely. I don't believe in flittering around the edges of things. You're either going to walk through life and experience it fully or you're going to be a voyeur. And I'm not a voyeur."

About the movie Australia

"It's the roughest thing I ever had to go through," she says. "The heat is debilitating. I was sitting on a horse once and I remember thinking, Gosh, this is what it feels like before you faintâ€”and then I fainted. There was another time we flew in by helicopter to the Salt Flatsâ€”it was like a moonscape, there was just nothing thereâ€”and we got caught in a dust storm so bad we couldn't even see. Everybody lived out there for five days in these little silver tents. It was great. That's the adventure. That's why you make movies. It's the equivalent of The African Queen, where they were out in the wilderness and Katharine Hepburn was washing her hair with a bucket. We all want that experience."