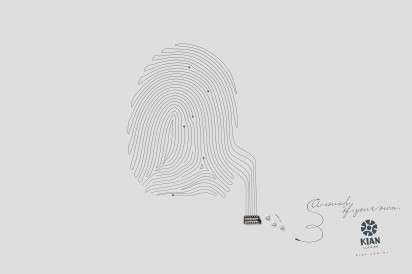 The Kian Luthier Campaign Promotes 'A Sound of Your Own'

Meghan Young — February 19, 2013 — Marketing
References: rccom.br & ibelieveinadv
Share on Facebook Share on Twitter Share on LinkedIn Share on Pinterest
The Kian Luthier campaign promotes the tantalizing idea of making one's own music by focusing on the image of a fingerprint. Fashioned out of thin guitar strings, the print ads read, "A sound of your own." Appealing to people's desire to be different from others, the Kian Luthier campaign urges aspiring and veteran musicians to get their own quality guitar to play on.

Conceived and executed by RC Comunicação, an ad agency based in Belo Horizonte, Brazil, the Kian Luthier campaign uses minimalist imagery to get its point across. Expertly art directed and illustrated by Rodrigo Spotorno with creative direction by Guilherme Araújo, it also relies on a basic human desire, which should speak to many.
1.9
Score
Popularity
Activity
Freshness
View Innovation Webinars