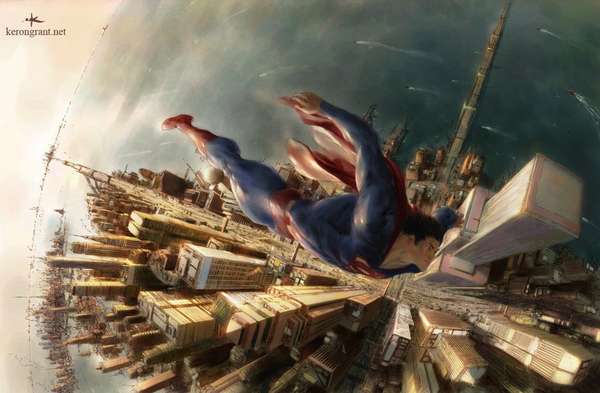 Jason Soy — August 15, 2011 — Pop Culture
References: kerong.deviantart & geektyrant
Numerous pictures in cyberspace depict superheroes using their powers, but none of them let viewers experience superpowers firsthand the way these Keron Grant illustrations do. Calling himself Kerong on his deviantART page, Grant has created some stunning images of your favorite DC Comic and Marvel staples in candid moments as the superheroes use their powers at full force.

The Keron Grant illustration that stands out the most has got to be the featured image of this article, which has Superman hurtling through the skies at such height, viewers can see the curvature of the Earth. The image of The Flash racing towards the viewer at such breakneck speeds that his surroundings are just a blur is also a noteworthy one.

Implications - Consumers enjoy superhero-related media because they represent ideals people should morally strive for, acting as a benchmark and tool of empowerment for consumers. Corporations may consider using superhero imagery in their wares to communicate the company's morality in its business operations.
5.3
Score
Popularity
Activity
Freshness