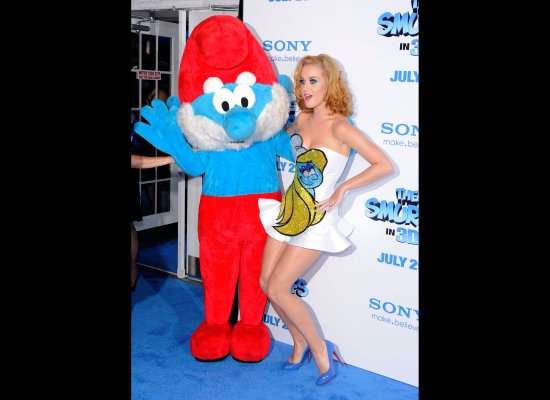 Corinne Guirgis — July 26, 2011 — Celebs
References: huffingtonpost & cocoperez
Share on Facebook Share on Twitter Share on LinkedIn Share on Pinterest
The sultry show-stopping style of the Katy Perry Smurfs Premiere look is the realest form of "art imitating life." The sexy songstress, who voices leading lady Smurfette in the film adaptation of the popular cartoon series, inhabits her character with this custom dress by The Blonds. The pop star completed the look with pale blue Louboutin heels, some striking blue eye shadow and her new stunning blonde locks.

According to the Huffington Post, "Katy Perry stole the show, continuing both her tradition of sexing up children's characters and wearing hyper-sexualized clothing depicting them." The controversial star is recognized for her risque looks that have seen a great deal of controversy and male attention, and this smurf-tastic costume will surely be no exception.

Implications - Although the faces of celebrities who voice animated characters are not shown in these popular films, these actors receive a great deal of attention off screen from the consuming public. Publicity stunts such as this one are a great way to further the buzz around both the actor and the film.
5.8
Score
Popularity
Activity
Freshness
Access Advisory Services