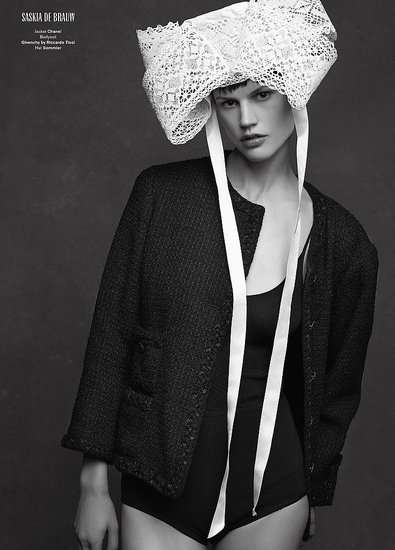 Souzan Michael — November 10, 2011 — Business
References: fashion.telegraph & fashionologie
Share on Facebook Share on Twitter Share on LinkedIn Share on Pinterest
There is only one thing that would make a book full of images of Chanel-clad models better, and that would be if a certain former Vogue Paris editor in chief acted as the stylist, which is exactly what fans can expect from the Karl Lagerfeld and Carine Roitfeld book.

The book will be a series of black and white images shot by Mr. Lagerfeld and styled by Carine Roitfeld. The book is centered around the iconic Chanel tweed jacket and showcases the endless ways that it can be styled. Some preview images have been released (and will be available in this month's issue of V magazine) and feature Dakota and Elle Fanning, Saskia de Brauw, Daphne Groeneveld and Charlotte Casiraghi.

"This jacket is a vital and irrational impulse open to creativity and transformation," Lagerfeld explains, adding, "especially in the hands of Carine Roitfeld." Stay tuned for more about the Karl Lagerfeld and Carine Roitfeld book, as it's sure to be an instant classic.
3.9
Score
Popularity
Activity
Freshness
Jeremy Gutsche Keynote Speaker