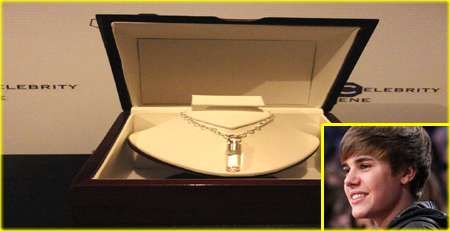 Rachel Leung — May 27, 2011 — Marketing
References: celebritygene & associatedcontent
Share on Facebook Share on Twitter Share on LinkedIn Share on Pinterest
A company called Celebrity Gene, located in Thunder Bay, ON is hoping to recruit Justin Bieber to be the spokesperson for their company. Celebrity Gene markets itself as the first company to ever sell celebrity DNA in a stylish pendant. Offering him $1 million, Celebrity Gene looks to sell necklaces enclosed with samples of Justin Bieber’s DNA. Predicting a highly anticipated demand and massive sales based on his fan base of Beliebers (On Twitter alone he has almost 10 million followers) this is sure to be the hottest, if not most unique accessory on the market.

With Justin Bieber most recently releasing a fragrance for females called “Someday,” and his hair selling for $40,668 -- the limits are seemingly endless. This Celebrity Gene Justin Bieber gene necklace idea doesn’t seem impossible or too far-fetched, as long as you “Belieb.”
5.5
Score
Popularity
Activity
Freshness
Get the 2021 Trend Report FREE