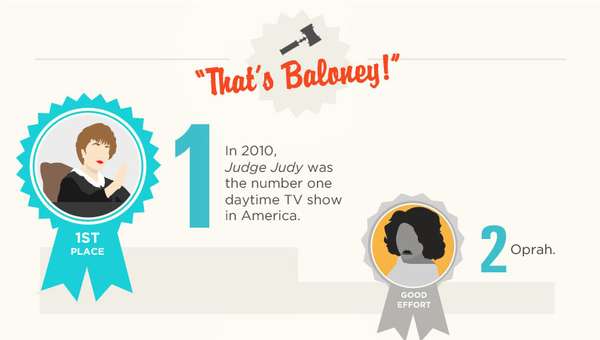 The Judge Judy Infographic Takes a Look at the Badass Judge

Carly Foy — May 8, 2011 — Pop Culture
References: paralegal.net & holykaw.alltop
Share on Facebook Share on Twitter Share on LinkedIn Share on Pinterest
Judge Judy, America's favorite judge, has become so integrated into pop culture with her catchphrases, such as "Zip your lip" and "Beauty fades but dumb is forever," that it only makes sense that the loveable lady has her own astounding infographic.

This infographic just takes a peek at how awesome Judge Judy is. For example, every day, almost seven million people tune in to watch her dish it out. She even beat Oprah to be the No. 1 daytime television show in America.

The best part of this infographic by far is the explanation on how to get on Judge Judy because whether you win or lose, you still get paid. As a major fan of the television personality, I may have to use that information for future reference.
0.8
Score
Popularity
Activity
Freshness
Attend Future Festival Virtual