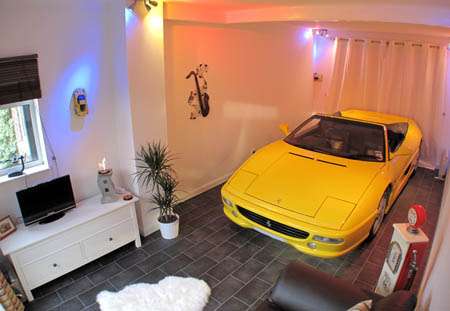 Corinne Guirgis — May 24, 2011 — Autos
References: odditycentral
UK native and Ferrari Fanatic Jon Ryder is no ordinary Ferrari owner (if such a thing exists). Ryder and his wife have converted their garage into their living space so they can admire and stare at their bright yellow Ferrari F355 from the comfort of their couch!

The 28-year-old Ryder says the perfectly maintained 1996 Ferrari is "his favorite piece of Italian art and that’s precisely why he wanted to find a place to put it on display right in his house."

The garage door at the end of the room is covered by a decorative curtain, and to the naked eye, it would appear to be just another ordinary living space.

When John Ryder moved into his new house last year, he set about converting the garage into a "bachelor" TV room which would accommodate his car. The car, which somehow fits into the living space as if it were just another couch, can accelerate from 0 - 60 mph in 4.6 seconds and has a top speed of 183mph.

With an acceleration like that, let's just hope Jon remembers not to put the car in reverse when he takes it for a spin!
4.7
Score
Popularity
Activity
Freshness

$275,000 Sports Car Encyclopedias
The Ferrari Opus is the Most Extensive Automobile Reference Ever
play_circle_filled