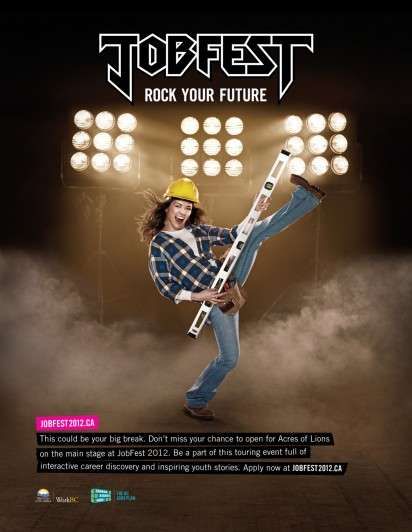 Meghan Young — June 21, 2012 — Marketing
References: cossette & ibelieveinadv
Share on Facebook Share on Twitter Share on LinkedIn Share on Pinterest
The Jobfest 2012 campaign encourages people to rock their future by attending an event that will put them in contact with great job leads, which could very well result in a fantastic, dream-fulfillling career path. From a head-banging construction job to a hard-partying computer gig, the possibilities are endless, especially if people take their future in their own hands instead of waiting passively for an opportunity to magically appear before them.

Conceived and created by Cossette, an ad agency based in Canada, the Jobfest 2012 campaign is fun and creative, inspiring energetic enthusiasm when it comes to job searches and career paths. It was art directed by Bart Batchelor and Rob Sweetman with creative direction by Bryan Collins and Rob Sweetman and copy writing by Mike Felix.
1
Score
Popularity
Activity
Freshness
Get Trend Hunter Dashboard