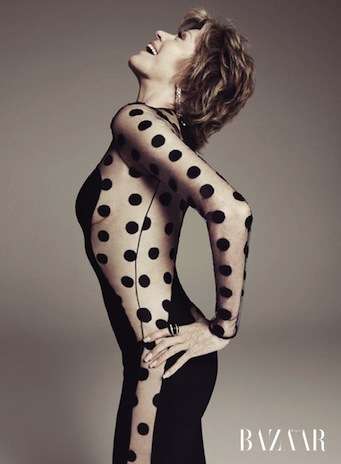 Souzan Michael — August 8, 2011 — Life-Stages
References: cocoperez & blogs.villagevoice
Celebrities are expected to look good -- now and until they're about 100 years old -- and the Jane Fonda Harper's Bazaar shoot demonstrates that some actually manage to keep up their appearance well into their senior years.

Sure, it's no surprise that Ms. Fonda looks good. I mean, it's Jane Fonda. But just how good she looks is absolutely blowing my mind. The 73-year-old actress poses in a sheer polka-dot Stella McCartney dress that most 25-year-olds could not pull off. But of course, she does it flawlessly.

The same dress has previously been donned by Kate Winslet on the red carpet and is featured in the Stella McCartney Fall 2011 ads. Somehow, Fonda manages to look better than both Winslet and a supermodel, an impressive feat for anyone, but it's just another day for Jane Fonda.
3.1
Score
Popularity
Activity
Freshness