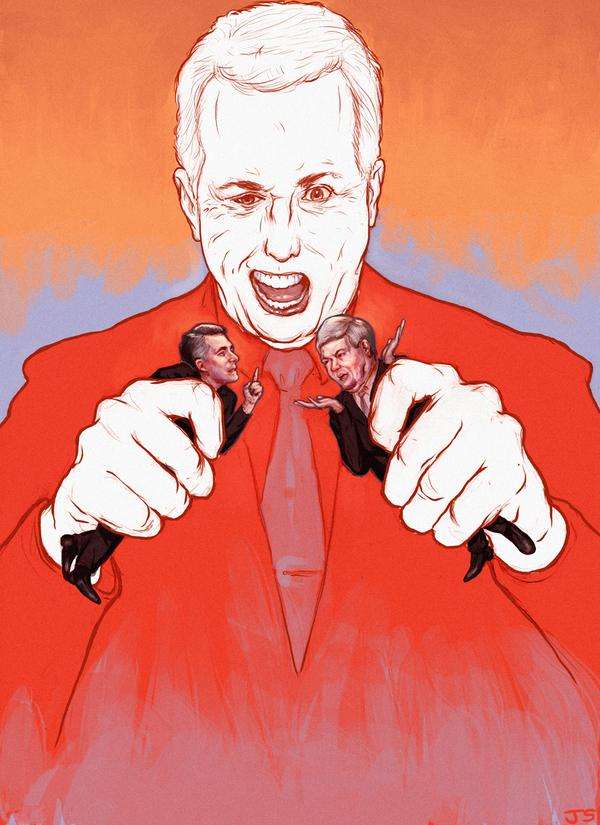 Most of the artist's wrath, satire, bemusement—however one may define it—is directed at the intrepid candidates who have sought or are still seeking that ever-elusive, tirelessly fickle Republican presidential nomination. In one illustration, Newt Gingrich is shown gingerly placing a framed picture of a child’s drawing of a crescent moon and earth smiling tenderly at a boy in a spacesuit—how sweet.

Rick Santorum, whether he is one’s blessed savior or dreaded harbinger of all things big ‘C’ conservative, deserves credit for surprising the pundits. He has managed to eclipse Newt Gingrich and give Mitt Romney a run for his (plentiful) money. He is depicted in the Jacob Sanders Editorial Illustrations as a menacing giant smashing those two candidates together.

Needless to say, the the Jacob Sanders Editorial Illustrations are apt.

Political Commentary Captions
The 'What We See VS. What Politicians See' Series has a Bone to Pick
play_circle_filled

Dictator Cake-Smashing
Is This Human Rights Celebration Funny or Tasteless?