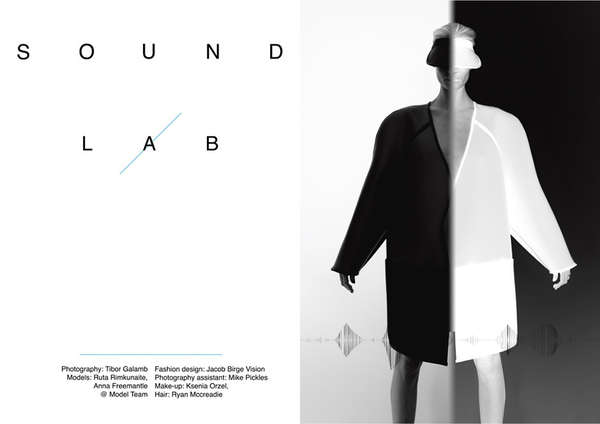 Meghan Young — July 29, 2013 — Fashion
References: jacobbirge & fashionising
Share on Facebook Share on Twitter Share on LinkedIn Share on Pinterest
It is almost hard to determine what is more experimental in the Jacob Birge AW13 lookbook, the clothing or the photoshoot. Of course, the photoshoot does win in the end, but it is an ode to the designs themselves that such a crazy concept was even dreamed up. There are three major elements in play, all of which lend the Jacob Birge AW13 lookbook an extreme futuristic element: sound waves, geometry and x-rays.

Shot in studio by photographer Tibor Galamb, the Jacob Birge AW13 editorial follows a monochromatic palette save for the bright blues and hot pinks of the fashion line itself. Starring models Ruta Rimkunaite and Anna Freemantle, the looks were styled by the designer himself. They were perfected by hairstylist Ryan Mccreadie and makeup artist Ksenia Orzel.
5.1
Score
Popularity
Activity
Freshness
Get Trend Hunter Dashboard