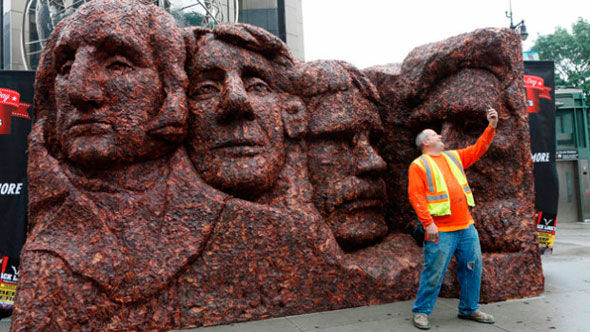 Misel Saban — June 18, 2014 — Lifestyle
References: jacklinks & foodiggity
Beef jerky is most likely the foundation upon which the American dream was founded so it only makes sense that Jack Link would recreate the iconic Mount Rushmore entirely out of beef jerky.

Link's sculpture of Mount Rushmore, cleverly titled Meat Rushmore, recreates the faces of Abraham Lincoln, Thomas Jefferson, George Washington and Theodore Roosevelt that were carved into granite rock in Keystone, South Dakota entirely out of beef jerky. Over 1,600-pounds of dehydrated meat was used to construct this 13-foot tall presidential sculpture. The Meat Rushmore was put together in New York City in celebration of National Jerky Day that celebrated the creation of the tasty meat snack.

Now that National Jerky Day has come and gone, I wonder what Links will do with all those pieces of beef jerky.
1.5
Score
Popularity
Activity
Freshness