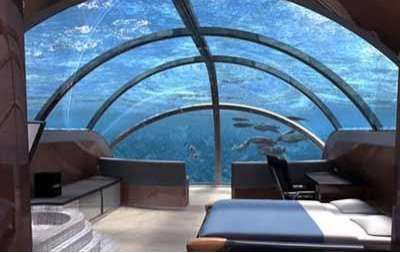 Djemal — February 17, 2008 — World
References: haberturk
Share on Facebook Share on Twitter Share on LinkedIn Share on Pinterest
This seven floor underwater hotel will give its guests a new view of the famous city of Istanbul. It is due to open in 2010, and will coincide with its Culture Capital of Europe nomination and lay down a gauntlet as a world capital of tourism. The hotel is the work of Tanriverdi Holding and have set aside a multi-million dollar budget to ensure the project is finished to 7 star standards.

The underwater hotel trend was reported on a year ago and this new project shows two unique characteristics - it will be based in the city center and will go one floor further underwater. The underwater hotel is being built on the ruins of a historical 1930s tobacco factory and will have restaurants, exhibition halls, and rooms all with sea view rooms.

It will be interesting to check-in and check-out the underwater hotel rooms and facilities, as local experts suggest that the underwater visibility of the Istanbul Bosphorus Strait (which is the body of water that links the Black Sea, to the north, with the Sea of Marmara, to the south) is about ten feet.