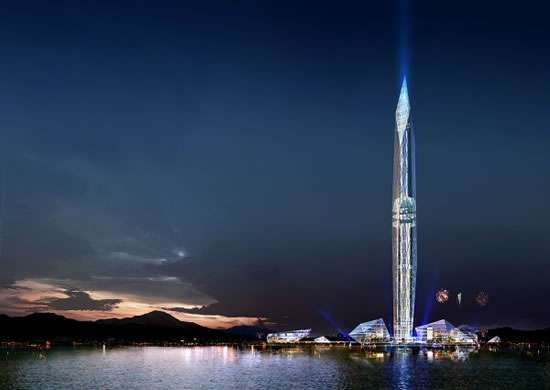 Korea's 'Cheongna City Tower' Will Blend with the Sky

Kevin Young — March 15, 2012 — World
References: luxatic & luxurylaunches
Share on Facebook Share on Twitter Share on LinkedIn Share on Pinterest
The 'Cheongna City Tower' in Incheon, South Korea, has some people already calling it 'The Invisible Tower.' The masterminds behind this project, GDS Architects, have some tricks up their sleeves. They're planning to use optical physics principles to make the building appear invisible. An emanating glow from the building with the help of super optical technology will make the building see-through with a mesh-like curtain.

The Cheongna City Tower stands out in a way unlike other prominent structures, many of which strive to be the tallest or biggest in the field. This invisible tower is expected to reach a staggering 450 meters and will cover 145,550 square meters. The tower will include a water park, promenades, outdoor stadiums and boutiques. Expected completion of the invisible tower is set for 2014.
5.2
Score
Popularity
Activity
Freshness
Jeremy Gutsche Keynote Speaker