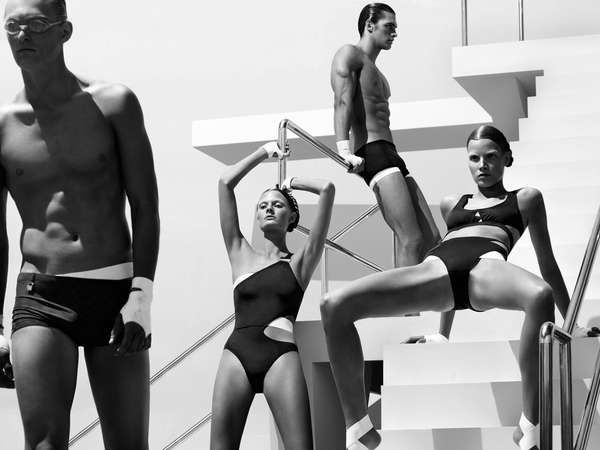 The Interview 'Olympiad' Editorial is Inspired by the Summer Olympics

Meghan Young — May 23, 2012 — Fashion
References: interviewmagazine & models
Share on Facebook Share on Twitter Share on LinkedIn Share on Pinterest
With the 2012 London Summer Olympics on the horizon, everyone has Olympic fever, which the Interview 'Olympiad' editorial feeds. Captured on the long climb to the diving board, this particular editorial focuses on swimwear. Stoic, dramatic and stunningly sculptural, the Interview Olympiad editorial is nevertheless inspired by gymnastics and the sport's "simple, graphic lines, and elasticized bands that stretch against taut, toned, rock-hard physiques," as written by the magazine.

Tuxedo-Inspired Swimwear
These Tailed Swimsuits are Full of Waterproof Elegance