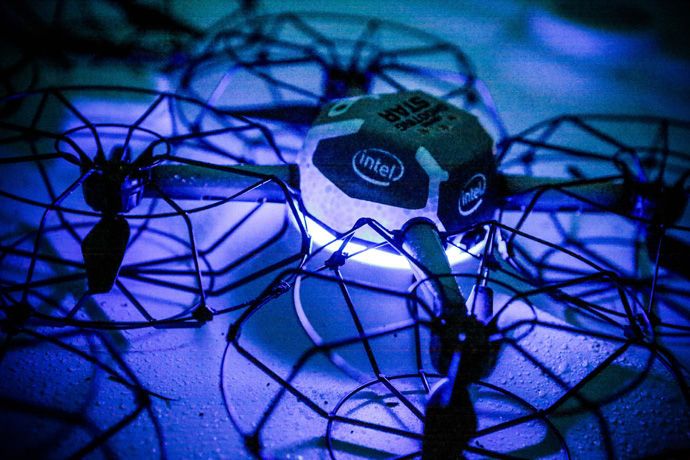 Joey Haar — November 7, 2016 — Tech
References: newsroom.intel & engadget
Share on Facebook Share on Twitter Share on LinkedIn Share on Pinterest
The sky's the limit when it comes to the purposes that drones can serve, and the Intel Shooting Star drones are an example of how the unmanned aerial vehicles can be used when programmers and designers get creative. The quadcopters are purpose-built to perform light shows in conjunction with one another, creating beautifully choreographed overhead images by flying in formation.

The Intel Shooting Star is built like a standard, lightweight quadcopter drone, however it comes with a powerful LED at its center. That LED has virtually unlimited color combinations, with Intel claiming a total of 4 billion hues. The microchip company also designed a software program to control a plethora of the drones at once with a single operator; at a recent event in Hamburg, Germany, 500 Intel Shooting Star drones flew in formation.
3.6
Score
Popularity
Activity
Freshness
View Innovation Webinars

Drone-Hunting UAVs
The Airspace Drone Takes Down Other Unwanted Drones