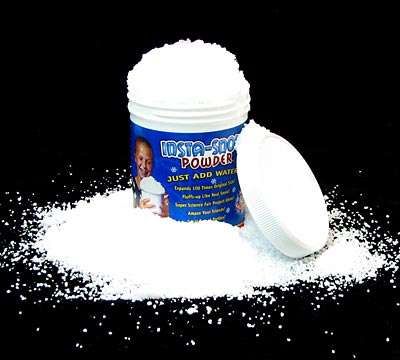 Mike Weldon — July 24, 2006 — Science
References: thinkgeek
Share on Facebook Share on Twitter Share on LinkedIn Share on Pinterest
Mail order snow? Yes! Sounds odd if you're from Canada, but if you live in the desert and want to make a snow ball, what are you going to do? Think Geek offers an answer with Instant Snow. 1 jar for just $12.

From Think Geek:
Somewhere, in Death Valley, California, Little Johnny asks his mommie, "How does Santa get here, if it never snows?"

Her mind races as she tries to come up with an answer. Repulsorlift? Hovercraft? Transporter? Little Johnny, a clever little tyke, would see through such simplistic ruses. She stammers as Little Johnny's quizzical expression turns to distrust and frustration.

In a flash, she remembers! "Aha! He makes his own snow! He carries a small container of this special powder that he mixes with water to create fresh snow!"