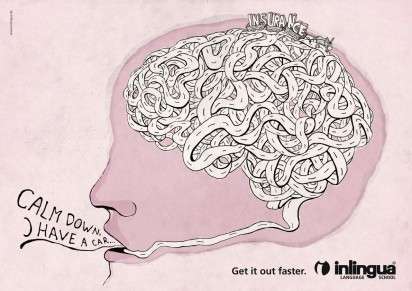 Meghan Young — March 8, 2013 — Marketing
References: kolle-rebbe.de & ibelieveinadv
Share on Facebook Share on Twitter Share on LinkedIn Share on Pinterest
Anyone can experience a mind melt when in a stressful situations, but the Inlingua Language School campaign shows that it can be particularly difficult for those in foreign countries. When English is a person's second language, words like 'insurance,' 'restroom' and 'luggage' can easily escape them when they need them the most. This vocabulary struggle is depicted by images of mind mazes.

Created by Kolle Rebbe, an ad agency based in Hamburg, Germany, the Inlingua Language School campaign reads, "Get it out faster." When this language school's help, stressful moments will not be made more stressful by fumbling for words. The ad campaign was art directed by Sandra Gelewski and Bogdan Nestor with creative direction by Ales Polcar.
4.5
Score
Popularity
Activity
Freshness
View Innovation Webinars