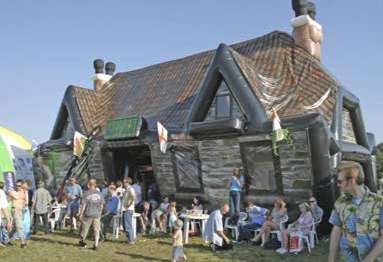 Designed for adults, the blow-up bars, which can be rented out, look similar like regular inns, taverns or pubs, but are made the same stuff as bouncy castles for kids. I have a feeling these would be way more fun! The portable, air filled units would be awesome for parties, from backyard bashes for your buddies to corporate BBQs. I'd even suggest it for weddings!

"There are four varieties of pub to choose from," says Amber Iris, the UK company who rents them out. "The Firkin, Kilderkin, Barrel and the Hogshead - all named after beer containers - cost between £4379 and £16,500."

Smokers, I hate to burst your bubble, but you can't light up in here; falling ciggy butts would be the end of all the fun!

"It is the size of a normal stone-built pub, at 50 feet by 25 feet, and it takes up to four people to put up," the press release explains. "The pubs feature a pan-tiled roof effect with chimney pots. Inside, there is a pretend fireplace and stonewall effect."

I want to play!