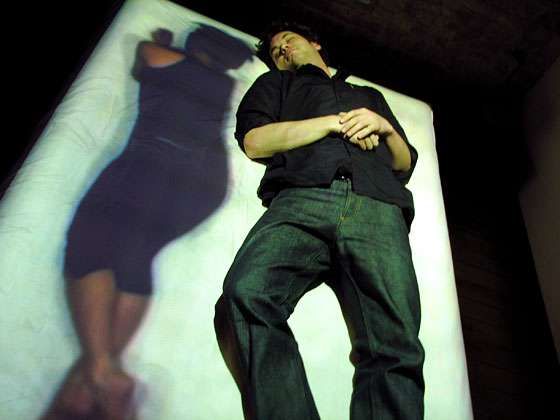 Ayman — May 15, 2008 — Naughty
References: nymag
Share on Facebook Share on Twitter Share on LinkedIn Share on Pinterest
Consumed with his graduate school program and motivated by a loneliness I can totally identify with, New York University student Drew Burrows showcased INBED, an "infrared-sensitive" light projected virtual girlfriend, at NYU's Interactive Telecommunications Program Spring Show at Tisch School of the Arts.

So what is it exactly? It's a single mattress with an attractive brunette who is perfectly quiet. So far sounds like a good girlfriend! Once you sit or lie down on the mattress, she will respond to your every move.

New York Magazine explains, "Lie on your back, she snuggles up right next to you in a log position. Curl up in the fetal position, she spoons. The only hitch: She's 2-D. "Yeah, you can't feel the girl. That's the thing," Burrows explained as he demonstrated his invention, an "infrared sensitive" light projection (meaning it reacts, and the projected woman moves, based on an infrared sensor) called INBED. "Still, it's so nice if you're tired and worn out to have someone to curl up with."

While it's not a replacement for a real girlfriend, it's better than being in an empty bed, especially if you can program the girl to look like someone you want (creepy?).
5.3
Score
Popularity
Activity
Freshness
Jeremy Gutsche Keynote Speaker

93 Reality Alternatives
Living Our Lives Through Alterations and Surrogates