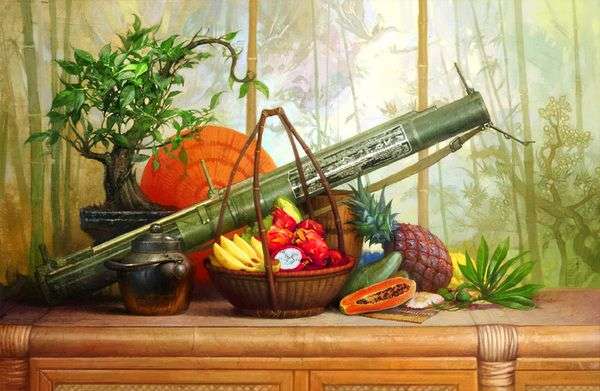 Meghan Young — August 24, 2012 — Unique
References: inspirationfeed & neatorama
Share on Facebook Share on Twitter Share on LinkedIn Share on Pinterest
Igor Ovsyannykov has tweaked the traditional still life format, although in a very subtle way. So subtle, in fact, that a casual observer would probably dismiss Igor Ovsyannykov's work as typical paintings. Nevertheless, it doesn't even take close inspection to all of a sudden notice the bazooka leaning against a basket of fruit or the rifle lying in front of a violin.

Based in Virginia, Igor Ovsyannykov is an imaginative artist who has decided to tweak the classics rather than create something entirely new. A mere 20 years in age, he is a blogger and designer who reveals a love for "weight lifting, hanging out with friends and losing his mind to progressive house music," on his website Inspiration Feed. But Igor Ovsyannykov "mostly spends his time working here and sharing resourceful knowledge with others."
5.3
Score
Popularity
Activity
Freshness
Access Advisory Services