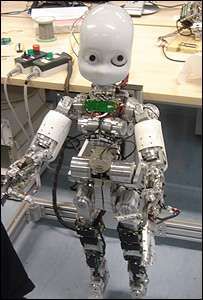 IdeaMan — March 28, 2008 — Unique
References: perseus.herts.ac.uk & news.bbc
Share on Facebook Share on Twitter Share on LinkedIn Share on Pinterest
The University of Plymouth is leading a consortium in the UK with the goal of teaching a "baby" robot to speak. The researchers will be working with language development specialists to understand how humans learn speech, and will try to apply that approach to a humanoid robot called the iCub (which, incidentally, looks kind of like Caspar the Friendly Ghost). The first steps will be to teach the robot to name objects and actions and eventually rudimentary phrases, such as "robot puts stick on cube", according to BBC News.

Two researchers from the University of Hertfordshire's School of Computer Science, Professor Chrystopher Nehaniv and Professor Kerstin Dautenhahn, are part of the consortium working on ITALK, (Integration and Transfer of Action and Language Knowledge in Robots). Understanding human acquisition of language will be key. According to Prof. Nehaniv, "Like a child learning by imitation of its parents and interacting with the environment around it, the robot will master basic principles of structured grammar, like negation, by using these abilities in context."
2.3
Score
Popularity
Activity
Freshness
Get the 2023 Trend Report FREE