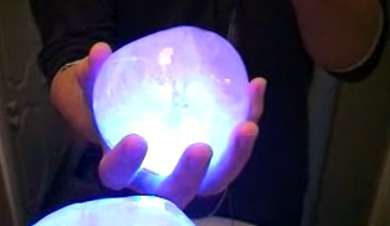 Jeremy Gutsche — May 17, 2007 — Art & Design
References: instructables & techeblog
Share on Facebook Share on Twitter Share on LinkedIn Share on Pinterest
Over the last year, there has been a major increase in the number of projects being submitted to DIY communities like instructables. We've featured a number of these interesting projects, and Ice Bulbs should be no exception. An Ice Bulb is basically a ball of ice with a LED light in it, but the effect itself looks pretty intrigueing. The designer describes, "You make it by placing the contraption inside water, which is placed inside a balloon, which is placed inside your freezer. A fun project for the coming summer months."

Whether or not you make your own ice bulb, the rise in DIY communities is a facinating trend worth watching!
5.7
Score
Popularity
Activity
Freshness
Jeremy Gutsche Keynote Speaker