How to Wear High Waist Jeans 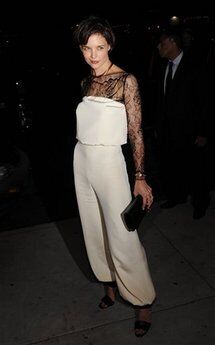 Sandra Winn — October 18, 2008 — Pop Culture
References: eonline & news.yahoo
Share on Facebook Share on Twitter Share on LinkedIn Share on Pinterest
Jumpsuits, a debatable hot fall fashion, have been worn by a few celebs lately. The homemade jumpsuit donned by Katie Holmes, however, looks like something out of a nightmare ‘I Dream of Jeannie’ would have had.  She proudly wore this fashion concoction--a white jumpsuit over a black lace shirt--to a party after her Broadway debut performance in ‘All My Sons.’

Katie Holmes' jumpsuit was not the only item under critical review last night; critics from USA Today, Variety, the Chicago Tribune, the Associated Press, and more were not overly impressed with her performance in 'All My Sons.'  Of course, hubby Tom Cruise raved about her Broadway acting debut.

Holmes looked great in a designer black jumpsuit a few months ago—she should have gone with a designer's creation rather than her own.  Did you notice her black lace shirt being visible in the back? I'm not a fashion expert, but I think that is a definite fashion faux pas.

Unlike Katie Holmes' other recent fashion inspirations, I highly doubt people will jump on copying this homemade jumpsuit. Too bad she can't fold her arms, nod her head, blink her eyes, and go back in time to avoid this disaster of an outfit like Jeannie would have.
2.6
Score
Popularity
Activity
Freshness
Get Trend Hunter Dashboard