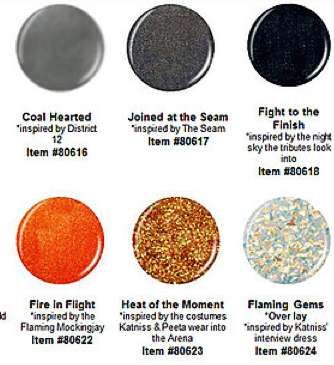 Marie C. Hudson — November 16, 2011 — Fashion
References: chinaglaze & alllacqueredup
Share on Facebook Share on Twitter Share on LinkedIn Share on Pinterest
Female sci-fi fans, it appears all your wishes are coming true with news of the China Glaze 'The Hunger Games' nail polish line set for release in early 2012. The popular polish company paired up with the science fiction franchise to create 12 awesome lacquers inspired by the novels.

With 'The Hunger Games' film adaptation set for a March 2012 release, excitement is already building, and I'm sure these lovely lacquers will only add to the buzz! With shades inspired by characters, places, and other elements from the books, the line really does have something for everyone. I'm over the moon about the light and bright glittery 'Flaming Gems' lacquer, and can't wait to try it out for myself.

Whether you're a diehard fan of the series, or you're waiting to see the film before delving into the novels, The Hunger Games nail polish by China Glaze can't be missed!
4
Score
Popularity
Activity
Freshness
Access Advisory Services