Advertising on Toilet Paper
Next
Set of
Related
Ideas 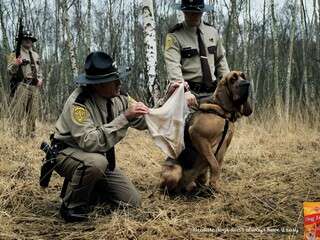 Geebee Micro — March 26, 2009 — Marketing
References: funnyplace.org
Share on Facebook Share on Twitter Share on LinkedIn Share on Pinterest
Here are some hilarious ads I found at funnyplace.org, some of which are far more effective than words could say. What's interesting is that, although some of these ads go a few years back, they still have us buzzing due to their ability to entertain us.

Some I particularly like include the one where it says, “Because Dogs Don’t Always Have It Easy,” where the dog has to sniff a pair of dirty underwear. The photo is funnier than simply saying it. It’s marketing Pedigree Dog Treats by Pedigree Petfoods.

The one with the picture of a woman with large breasts where it says, “Real Fries In a Fake World,” is also a really humorous ad from New York Fries.

The two dogs side-by-side are from the Pineda Hair Transplant Clinic, saying, “It Makes a Difference,” where one dog’s head is almost bare and the other full.

“Less funny, but just as heavy: 20 centimeters of snow on your roof,” is the photo with the elephant on the roof for Allianz Insurance.

Looking like she’s getting a kick in the rear from a mannequin, is an ad implying “Maybe It’s time To Move On,” from Career Builder.

Scatto markets its “Ultra Quick Setting Cement” with the partially finished writing on the sidewalk.

Last but not least is the hit man getting rid of a body near a lake where the line is, “Well, at least He drives a Prius.” Great stuff!
5.2
Score
Popularity
Activity
Freshness
Get Better and Faster