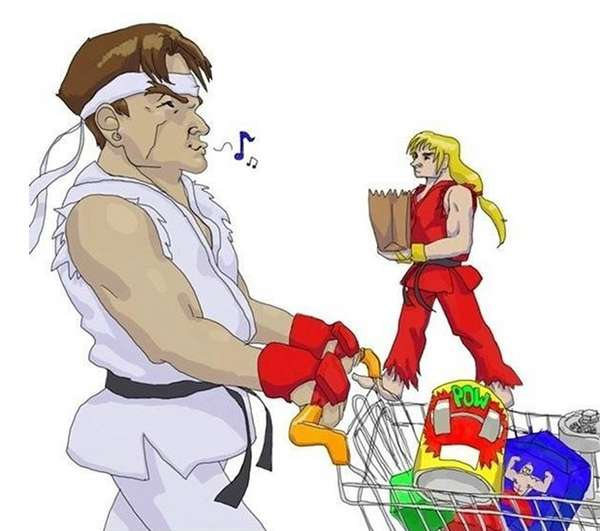 Jason Soy — July 21, 2011 — Pop Culture
References: reddit & nerdapproved
Share on Facebook Share on Twitter Share on LinkedIn Share on Pinterest
Every Street Fighter fan knows that entering the button combinations down, up and punch unleashes a fireball out of Ryu and Ken's hands known as the Hadouken, but this HowDoYouDoKen comic parodies that infamous game move by showing what would happen if the fighting technique was accidentally used inside of a grocery store.

The HowDoYouDoKen comic starts off innocuous enough with Street Fighters Ryu and Ken passing each other at a grocery store. Ryu then mistakenly asks, "HowDoYouDoKen?" which unleashes a fireball from his hands and into Ken's face. After quickly realizing his mistake, he asks, "Sorryyouken", which unleashes another famous Street Fighter move which launches the character into an aerial fire uppercut.

Implications - Consumers enjoy parody products because it offers them new content while reinvigorating their interest in the original product. Corporations can achieve a similar effect with self-deprecating promotional campaigns.
4.4
Score
Popularity
Activity
Freshness
Get the 2021 Trend Report FREE