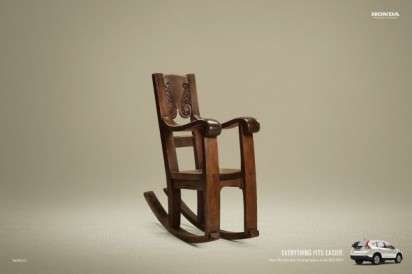 The Honda 'Everything Fits Easier' Campaign Promotes Its Spacious Trunk

Meghan Young — September 25, 2012 — Autos
References: ibelieveinadv
Share on Facebook Share on Twitter Share on LinkedIn Share on Pinterest
The Honda 'Everything Fits Easier' ad campaign cleverly shows that items placed in its trunk, be them inanimate or not, will appear to be a lot smaller than they are. That's because it is so roomy that it can fit quite a bit. With "over 70 cubic feet of cargo space in the 2012 CR-V," as stated in the print ads, the campaign revolves around images of a chair, golf club set and dog, all of which have been surreally compressed.

Conceived and executed by Dare, an ad agency based in the United States, the Honda 'Everything Fits Easier' ad campaign was art directed and creative directed by Rob Sweetman with additional creative direction by Bryan Collins. Hilariously photographed by Anthony Redpath, the copy for the campaign was written by Mia Thomsett.
5.3
Score
Popularity
Activity
Freshness
Get Better and Faster