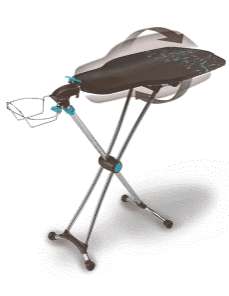 The Ungar Group/Chicago was given the challenge of creating a marketing and ad campaign for the new, revolutionary Homz 360 ironing board, and they have largely succeeded.

While the design and utility of the ironing board helps make the advertising job easier, let’s face it, it’s still an ironing board.

Yet, there’s an element of intrigue and fun when looking at the Homz 360 being displayed, and the advertisers took that and ran with it.

The Ungar Group put together a video that focuses on sexiness, with an occasional glimpse of the Homz 360 in the background.

You don’t really understand what’s happening until the end of the video where the question is asked, “Can an ironing board be too sensual?”

In the opinion of the Ungar Group and Homz, it can’t be. And evidently this has resonated with a lot of people, and a significant amount of interest has been generated as a result.
3.6
Score
Popularity
Activity
Freshness
Get Better and Faster