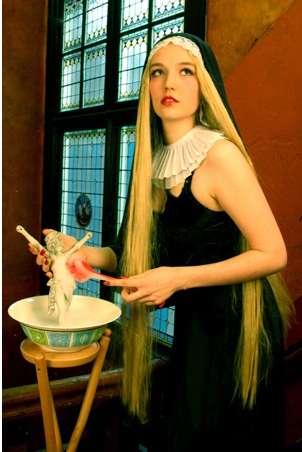 Sandra Winn — August 25, 2008 — Social Good
References: timesonline
Share on Facebook Share on Twitter Share on LinkedIn Share on Pinterest
In what is sure to be the “Mother Teresa” of all pageants, Miss Sister 2008 (also known as the Sister Italia Contest) will hit the internet next month. The originator of this Catholic Beauty contest is Italian Priest, Father Antonio Rungi, of Mondrag-one, Italy. The contest will take place online, via his blog once it is up and running, and is open to nuns only.

The question on everyones mind, “Will we see bikini-clad and provocatively dressed nuns?” No. Contestants between the ages of 18-40 will send in photos of themselves in their most heavenly attire or modest clothing. The nuns who enter must also include a bio of their life as a nun and their outside of nun life as well. Their photos and bios will be posted on Father Rungi’s blog and voted on by readers.

Although Father Rungi claims Miss Sister 2008 is about “inner beauty”, he foresees many beautiful applicants entering his contest. Inner beauty? Sorry, but if this contest is about “inner beauty”, then why prey tell, is his feminine ideal Sophia Loren? After Rungi tells of his feminine ideal, he then goes on to criticize “plasticized beauty” as seen on television. That comment smacks of hypocrisy, don’t you think? A bit contradictory too, considering that Sophia Loren is an actress.

Sounds as though Father Rungi’s Miss Sister 2008 Pageant will be nothing more than a scaled down beauty contest which aims to draw in contestants by claiming it is not about outer beauty but inner...yeah, right.
4.7
Score
Popularity
Activity
Freshness
Access Advisory Services