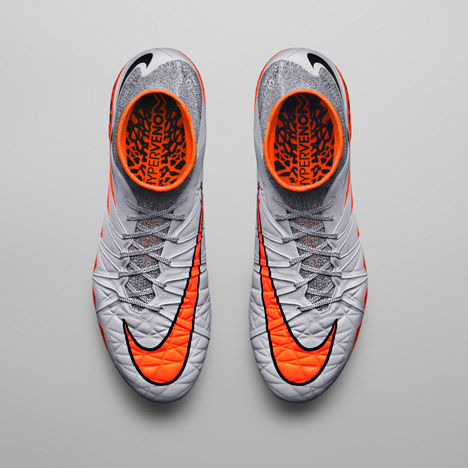 Katherine Pendrill — June 10, 2015 — Fashion
References: nike & dezeen
Share on Facebook Share on Twitter Share on LinkedIn Share on Pinterest
Nike unveiled a line of high-tech soccer shoes made from revolutionary new materials. The new 'Hypervenom II Boot' is an updated version of its original 'Hypervenom' kicks, but with a bold new twist. The new line differs in that it features a striking graphic design along with cutting-edge 'Nikeskin' materials.

The new high-tech soccer shoes are designed specifically for grass pitches and combine Nike's original knitted 'Flyknit' technology with padded inserts, which help to protect players from injury. The outside of the shoe features a bold gray and orange graphic that is formed from a thin layer of waterproof Nikeskin material. This technology is revolutionary in that it acts as a transition barrier between the hard base plate of the boot and the softer mesh top. Unlike other soccer shoes, Nike's updated Hypervenom kicks are specially crafted to help players run the same distance, but at a much higher pace.