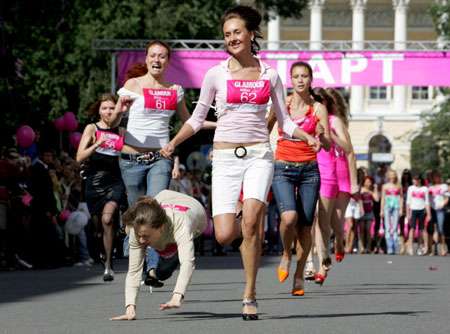 After Amsterdam, Berlin, Stockholm, Saint-Petersburg, and Moscow, it was Mexico City's turn on Oct. 28 2007 to organize such an event.

The race drew about 500 women strapped on stilettos for the city's first 100-meter High Heel Race.

The women, decked out in running gear and heels of at least 7 centimeters (2.75 inches), galloped through a downtown street. Several collapsed to the ground, casualties of the city's broken asphalt.

The eventual winner was an ex-national champion 1,500-meter runner, who said she practiced for the event for a week. Her time was under 15 seconds.

Special prizes also went to "The Most Elegant Runner", "The Best Smile", and "The Best Coiffed". Overal, prizes were worth about $1,800.

The event was not without its detractors: A group calling itself â€œTotally Indignantâ€ (a play on the â€œTotally Palacioâ€ slogan of the sponsor Palacio del Hierro, a department store) blasted race organizers for putting the women's health at risk and making a caricature out of women.

If you're looking for a video, check out Trend Hunter's post from July: