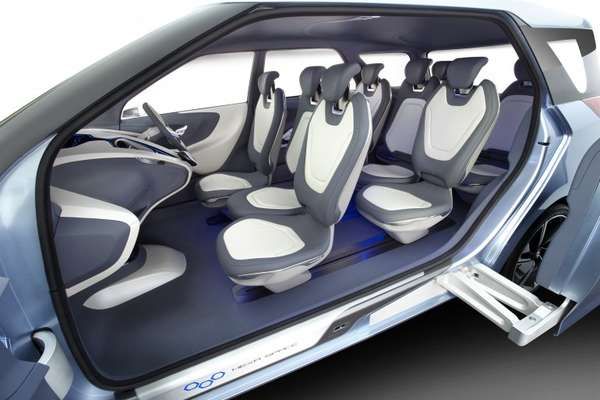 The Hyundai 'Hexa Space' is Marketed Toward Young Adults

Josh Mears — January 10, 2012 — Autos
References: hyundaicanada & gizmag
Share on Facebook Share on Twitter Share on LinkedIn Share on Pinterest
Forget the "two's company, three's a crowd" saying, Hyundai's new 'Hexa Space' seats seven in an inventive format. The Hexa Space is Hyundai's latest addition of concept cards to their forward-thinking, and rapidly expanding lineup of cars. It will debut at the 2012 Auto Expo which is held in New Delhi, India.

At first glance, the most notable aspect of this car is the honeycomb style seating and interior which features three fully-formed, full-size seats in the front. Hexa Space will feature Hyundai's new turbo-charged "Kappa" 1.2-liter engine GDI engine with six speed transmission, according to sources close to the company. To maintain maximum space while retaining its inventive inclusive seating plan Hyundai chose to use the most spacious geometrical shape, the hexagon. To accommodate to more spacious needs, the Hexa Space has six out of seven fully retractable seats, with the drivers remaining the lone stationary seat. This particular Hyundai is aimed at young adults in their 20s and 30s and is planned to be put into production, which will surely revolutionize conceptions toward both shapes and cars.
4.9
Score
Popularity
Activity
Freshness
Attend Future Festival