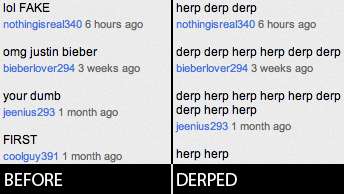 The 'Herp Derp' YouTube Extension Serves as a Commentator Police

YouTube often has some thought-provoking or interesting comments that get voted up by other users, but the trolls go in and troll the comments with either terrible comments or else complete gibberish. The 'Herp Derp' YouTube Extension is the perfect solution to never encountering another YouTube troll again throughout your adventures on the Internet.

The concept of 'Herp Derp' has been around for some time now and basically represents nonsensical comments that are made by Internet trolls throughout the web.
0.6
Score
Popularity
Activity
Freshness
Attend Future Festival Virtual