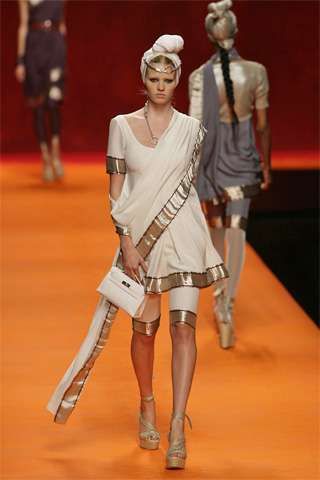 Bianca — November 17, 2008 — Business
References: style & vogue.in
Share on Facebook Share on Twitter Share on LinkedIn Share on Pinterest
Hermes recently launched their new flagship store in India in the high end Oberoi Hotel in Delhi. The French fashion house is attacking full-force at a time when most brands are cutting back, on their costs; DKNY even skipped print campaigns altogether this season, opting instead to recycle runway photos as ads.

Does the new store opening in India mean Hermes feels untouchable? Does it mean they know something the rest of the fashion world doesn’t about getting ahead?

“Why not open a store in India alongside?,” CEO Patrick Thomas says he’d thought after Hermes began planning an India-inspired fashion collection a few yeasr back. “So here we are after studying the market keenly; I am the kind of guy that does not leap until I see that something is there, and feel I am in a position to take that next step. Stoles, scarves, bangles, gift items with Indian motifs, patterns and colours rub shoulders with the standard pick-me-ups. And while it is not necessary to spend millions here… we do not mind if you do!”

Most certainly that is their hope. It will be interesting to monitor the spending habits of fashionistas in India in contrast to those in North America.