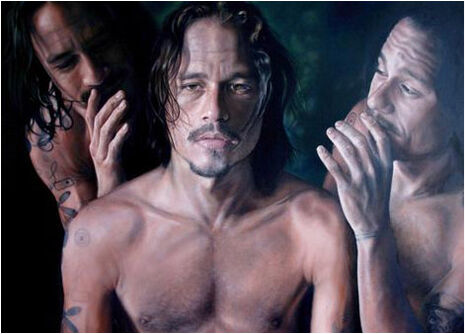 Ayman — February 4, 2008 — Pop Culture
References: news.au & arabaquarius.blogspot
Australia's The Daily Telegraph reports that Melbourne artist Vincent Fantauzzo put the finishing touches on his painting of Heath Ledger at his Docklands studio the day before the star was found dead in his NY apartment.

Ledger sat for Fantauzzo on his last visit home to Perth, Australia in December. Fantauzzo painted Ledger with the intention of entering the portrait in the prestigious Archibald Prize later this year. But the newly finished work got an early showing, when, with the approval of the Ledger family, Fantauzzo released the image to the media. The painting depicts the notoriously private actor as three separate images. The central, and largest, image is of Ledger, bare-chested, looking straight ahead, appearing pained and exhausted. The two background images are of Ledger wearing humorous expressions, whispering into the ears of his foreground image.
6.8
Score
Popularity
Activity
Freshness